Jerry Wexler, Atlantic Records boss and the man who coined the term ‘rhythm and blues’, has died at his home in Florida. He was 91. 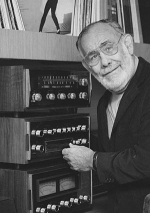 The legendary record producer helped shape the careers of musical titans such as Aretha Franklin, Ray Charles, Wilson Pickett, Bob Dylan, Led Zeppelin, Buffalo Springfield and countless more. A former journalist writing for Billboard magazine, he chose the term ‘rhythm and blues’ to describe the music on what was then known as the magazines’ ‘race music’ chart. In 1953 Wexler joined Ahmet Ertegun as co-head of Atlantic Records, a post he kept until 1975. If anyone helped popularise R&B it was Wexler and Ertegun, making stars of artists who may have only had a cult following otherwise. One of his many successes at Atlantic was the infamous mid-1960s distribution deal with Stax Records. In 1966 Wexler signed a young Aretha Franklin, who had been left floundering at Columbia, and nurtured her talent so as to produce her best, Muscle Shoals-assisted work. Also, in 1968, Wexler brought Dusty Springfield to Tennessee to record the now legendary Dusty in Memphis album.

Post-Atlantic Wexler did A&R work for Warner Brothers, siging many of the new-wave frontrunners, before spending the rest of his carreer in various studios producing the stars of the day. Wexler retired to Florida in the late 1990s.