It's been reported that Rod Stewart is set to record with new soul-funk outfit The Dap-Kings. 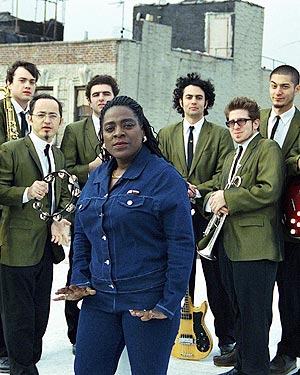 Daptone Records – home to The Dap-Kings – headquarters in Brooklyn, New York were unfortunately robbed this week, and in a statement Gabriel Roth, Dap-Kings bassist and band leader, let it slip that efforts were underway to sort out space and equipment quickly in order that Rod The Mod could record with them for a scheduled session.
The Dap-Kings are best known as Sharon Jones backing band, and recieve high praise whenever they tour Europe, so the results of this collaboration could well be worth seeking out.
In other Rod Stewart news, its been confirmed by The Faces organist Ian McLagan that recent reports on the band having recorded an album are somewhat overstated. He said on his website that:

The rehearsals were a lot of fun, everybody was in fine form, but nothing's happened since November. Don't believe anything you read about an album in the works, or a tour being planned until you read it here, because this page is bullshit free. I kid you not.