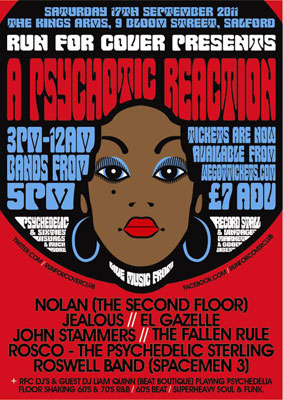 Not a traditional mod event, but Run For Cover in Salford will almost certainly appeal to a good number of folk with mod leanings.

It's a band and DJs night, intended to be a showcase for live 60s and psych-influenced acts doing the rounds. Of which there are many right now. The launch night, which takes place at The Kings Arms, Bloom Street in Salford (not far out of Manchester centre) is called A Psychotic Reaction and runs from 3am to midnight, the bands on from 5pm on Saturday 17th September.

There's also DJ support, playing everything from 60s R&B through to beat, funk and psych, plus visuals, a record stall and vintage market. £7 gets you in, tickets are available from here http://www.wegotickets.com.