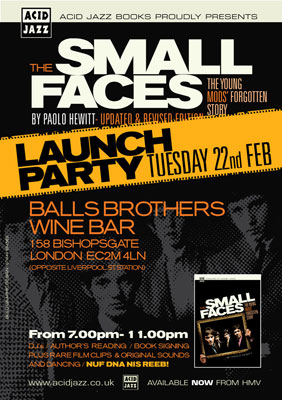 More of a relaunch than a launch, as The Small Faces – The Young Mods Forgotten Story by Paolo Hewitt has been out before. But regardless of that, there's a launch party taking place in London next month.

Specifically, the revised edition of the book gets an official premiere on Tuesday 22nd February 2011 a t Balls Brothers Bar and Restaurant, 158 Bishopsgate London EC2M 4LN (opposite Liverpool street station) from 7pm onwards.

Music is by Dave Edwards and Smiler, while the author will also be on hand for book readings and to sign some copies. The action starts at 7pm, with admission free.

More details on the book reissue