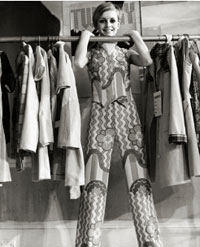 If you missed Philip Townshend’s Sorry You Missed The Sixties exhibition earlier this year, there’s some good news. It’s returning to London, this time at ninetythree from December through to January.

Sorry You Missed The Sixties is the decade as seen through the lens of  Philip Townsend, featuring a host of icons and celebrities from "swinging London". Townsend spent most of the decade freelancing for the Daily Express, as well as featuring in the Tatler, Honey, Harpers Bazaar, Der Stern, Neue Revue, Tempo, Paris Match and New York Times.

There’s a private viewing on Thursday 7th December at the gallery, with the exhibition continuing until 14th January 2007 (but closed during Christmas week).