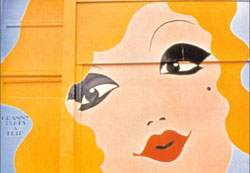 A couple of years back, an album came out called Sex, featuring the music played in Malcolm McLaren’s shop in the Kings Road in the mid 70s. Rather than the expected collection of early punk, it was actually a very quirky and entertaining mix of rock, soul and general strangeness from the 50s to the 70s. And now another iconic store – Granny Takes A Trip – is releasing the sounds that drifted out of its doorway- and again, it’s not quite what you’d expect.

The album, compiled by owner Nigel Waymouth, is called Conversation’s Dead Man (named after a comment from one of the store staff) and pulls together 18 tracks covering jazz, soul, blues and some contemporary rock of the time.

It’s perhaps not as experimental or cutting edge as you might think, but as Weymouth says: "You have to remember that 1966 was before rock as we know it – we didn’t have that library of music – black American music was our music. We were of the same generation as the Beatles and the Stones, and we were listening to the same records."

The full tracklisting can be viewed if you click on the "continue". If you want to pick it up, it’s out on July 10th. We’ll try and get a review sorted before then.