Arguably the biggest UK mod icon, Steve Marriott, has had his vocals sampled on a new single by a funk/soul outfit, the appallingly-named Lack Of Afro. 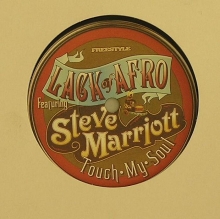 Today sees the release of ‘Touch My Soul’, a funky Hammond-led mash-up, faintly reminiscent of Small Faces track ‘Eddie’s Dreaming’. It takes the vocal line "Love is all around me, everywhere" from Marriott/Lane composition ‘Afterglow (Of Your Love)’ and builds around it. Indeed Touch My Soul is credited to Marriott/Lane alongside Adam Gibbons, the Exeter-based man behind Lack Of Afro. Cheekily the artwork for the single apes the cover of Small Faces’ classic 1968 album ‘Ogden’s Nut Gone Flake’.

Will it become a future ’60s scene spin?

Touch My Soul is out now on Freestyle Records. To listen to and purchase the single visit Juno Records here. For more on Lack Of Afro see their Myspace page here.