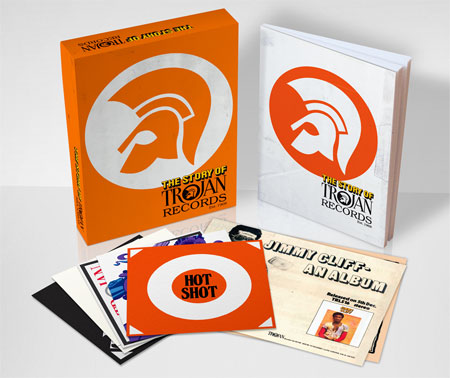 I keep saying I’m not updating the site until the new one goes live, but then I see things that perhaps are worthy of a news story a little sooner than that. Like The Story Of Trojan Records box set.

Released on August 29th, this is a newly-compiled archive of classics, rarities and unreleased material across five CDs. Specifically, that means 123 tracks, including a full disc of unreleased rarities. 87 tracks are new to CD, with many having been unavailable since their original release in Jamaica.

In addition, there’s a 50-page book with a foreword from Rhoda Dakar (The Bodysnatchers/The Special AKA), which also features original photography, memorabilia and other ephemera. Also included are four original reproduction double-sided postcards, based on flyers and original promotional material, a Trojan Window Sticker and an exclusive 12 track bonus digital album, which you can download once you’ve registered with the Trojan Appreciation Society. It’s available from Amazon for £30.47.

Find out more about the boxset at the Amazon website

Not just that launch, the Trojan Appreciation Society has just relaunched too, described as a ‘fan club for the digital era. Register any purchase from anywhere via the website and you’ll get exclusive bonus content, newsletters, exclusive new product and release news and merchandise from the label.

There will also be the chance to pick up limited edition promo items, exclusive content and special merchandise – like that download-only album with the boxset.