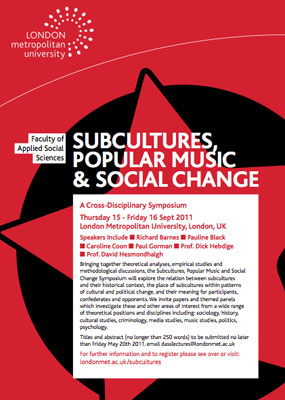 Possibly a little too academic for some and certainly a little last minute. But unfortunately, I've only just got the details through for the Subcultures seminar in London.

The full name is Subcultures, Popular Music and Social Change: A Cross-Disciplinary Symposium and it runs over Thursday 15th – Friday 16th Sept 2011 at The Graduate Centre, London Metropolitan University, 166-220 Holloway Rd, London, N7 8DB. If you want to go, check with [email protected] for places left for either tomorrow or the day after.

The discussions will cover everything from 1940s zoot-suiters and hepcats; through 1950s rock ‘n’ rollers, beatniks and Teddy boys; 1960s surfers, rudeboys, mods, hippies and bikers; 1970s skinheads, soul boys, rastas, glam rockers, funksters and punks; on to the heavy metal, hip-hop, casual, goth, rave and clubber styles of the 1980s, 90s, noughties and beyond, so not just about mods – but mods will play a key role in discussions.

The symposium also marks the launch of the Subcultures Network: The Interdisciplinary Network for the Study of Subcultures, Popular Music and Social Change – a cross-disciplinary research network for scholars and students interested in. subcultures

Some heavyweight speakers too, including Richard Barnes, Pauline Black, Caroline Coon, Paul Gorman, Professor Dick Hebdige, Professor David Hesmondhalgh. Apologies for not getting this out there sooner (especially if you are one of the many doing a 'mods' college project), but check via that email address if there are places left.