Far from a rarity, it's been around since 1950 and been reissued on numerous occasions. But I like the look of this forthcoming Adidas Samba in a white and green colourway. This all-round football training shoe is still very much the allrounder for daily wear, with a slim / low […]

It was out some years back, then went out of print, pushing prices up in the process. But now The Small Faces – The Young Mods Forgotten Story by Paolo Hewitt is available once more. It's updated from the 1995 original, with new images of the iconic mod band, plus […]

Friday On My Mind – 2nd edition

Regular readers might well be familiar with Friday On My Mind by Don Hughes, but if you've not yet picked up a copy, you might like to know thay a 2nd edition has been published. if you missed it, it's one man's tale of life as a mod in the […]

It's soon to be 30 years since The Jam released the Sound Affects album. Not something the record label could pass by, so watch out for the The Jam's Sound Affects Deluxe Edition. In fact, watch out for it on November 1st, a two-disc affair that promises eight previously unheard […]

We never actually got round to reviewing the original release way back when, but with a new reissue via PYMCA, maybe it's the perfect time to review Streetstyle by Ted Polhemus. Oriignally released in 1994 to coincide with a similarly-themed exhibition at London's V&A, Streetstyle is pretty much as it […]

I'll be honest, I don't recall an original, but according to Charly Records, Sehorn's Soul Farm is the reissue of a vinyl compilation first seen in 1982. The reissue is a double CD, offering up the original 1982 release and a second volume that was released in 1986, both volumes […]

Ok, we featured the Adidas Italia 1960 last week in a blue and white colourway, but new variations have since appeared online and are now available to order. The one above is the red and white colourway, essentially with the same detailing as the one we previously featured, but with […] 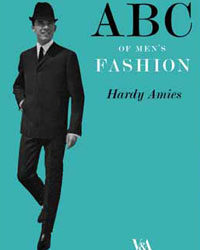 First issued in 1964, long out of print and sought after by just about everyone with an interest in classic/vintage fashion and style, The ABC of Men’s Fashion by Hardy Amies is finally scheduled for a reissue in the coming weeks. It’s re-appearance is down to the V&A, which is […]