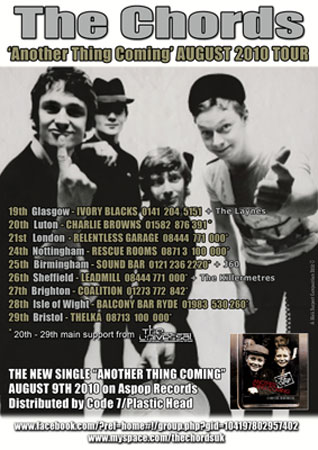 Ok, here's the thing. I keep getting emails from various promoters saying they have The Chords on. So rather than keep posting those up individually (and because I know it's not something that necessarily appeals to everyone), here are all the tour dates, so you can pick one the one near you.

As you can see from the flyer above, the UK tour goes from 19th – 29th August all over the country, kicking off in Glasgow. There's also a new single being promoted called Another Thing Coming, which is available Aspop Records from next Monday, August 9th 2010.

Check the numbers above for more details on your local gig.

The Chords on MySpace