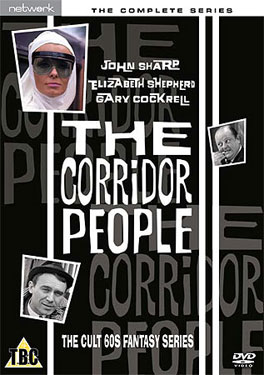 I'll be honest, I've never heard of it before, but the information sent across describes The Corridor People as a 'surreal crime/fantasy adventure series in the mould of the The Avengers'.

Dating back to 1966, just four episodes were actually broadcast of the series, which starred John Sharp and Elizabeth Shepherd (the actress originally cast as Emma Peel), offering up 'strikingly original photography', 'heavily stylised sets' and an end product like 'a lost Harold Pinter play with an added dash of Monty Python'.

What's it about? Well: 'A host of unlikely characters include Kronk, a paternal CID agent, his henchmen Inspector Blood and Sergeant Hound, and American, Bogart-worshipping private eye Phil Scrotty; each episode sees them pitched against the avaricious schemes of Syrie Van Epp, a beautiful, treacherous Persian millionairess.' So there you go. It's out in July for £10.99.