The Faces keyboard player Ian McLagan has confirmed the band are planning a reunion for later this year. 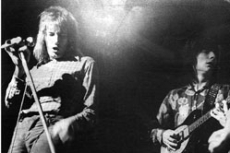 Everyone’s favourite tabloid The Sun revealed the story and McLagan has just confirmed it. Speaking to BBC 6 Music, he said

Rod hasn’t wanted to do it for a long time. He didn’t see the need in
it but I think he really wants to now. The Stones aren’t going to tour for over a year so
Woody has a window of opportunity; Rod has a window approaching. My
window is ever being opened and shut but I’ll open that window and
climb through it to work with The Faces anytime, and Kenney’s up for it.

The original Faces lineup comprised of Rod Stewart, Ronnie Wood, and three of the Small Faces: McLagan, Kenney Jones and the late Ronnie Lane. They formed in 1969 and released four studio albums before they split in
1975. It is reported there are plans for the band to start recording in the autumn, with a tour to follow in the winter. The band briefly came together on two previous
occasions – in 1986 and in 1993 – but this would be the first Faces tour for nearly 23 years.