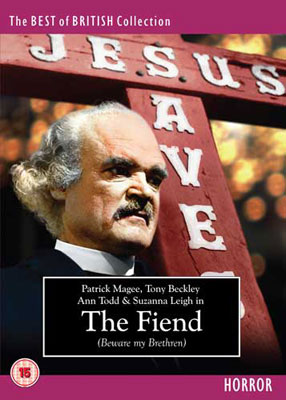 We know a lot of you love mad British horror movies of the 60s and early 70s, so you'll be pleased to know that one of the maddest of all – The Fiend – is finally getting a UK DVD release.

Directed by Robert Hartford-Davis, it's the tale of a religious sect known as The Brethren, which has an influence on a widow and her unstable son Kenny Wemys, played by Tony Beckley (previously seen in Get Carter and The Italian Job). He's more than unstable in fact – he's also compelled to kill in the name of God, recording the killings to play back on tapes, which he mixes with the religious rants of the sect's leader, The Minister (Patrick Magee).

Yes, very weird and not for everyone, but if you love your vintage Brit horrors, this is one for you. This DVD issue comes with newly-written liner notes and trailers and is available from 7th March 2011, pre-orders are already being taken by Amazon. See over the page for a slightly out of sync, but weird and wonderful snippet.