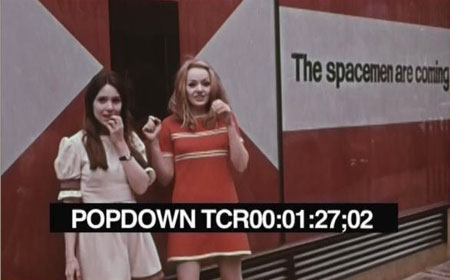 A short while ago, someone contacted me via the Cinedelica site saying he had a number of stills from the 'great lost mod movie' Popdown. That alone is worthy of mention, but Peter Prentice's story concerning the lost gem is even more interesting.

Check out the feature on Wiped, which recounts how Peter has tried to find a copy of this presumed-lost movie, contacting all associated with it and desperately trying to find out more about the man behind it, Fred Marshall. It's taken time and effort, but it could mean the film finally seeing the light of day for the first time since a screening in London in the 80s.

What's it about? Oh yes – two aliens (Zoot Money and Jane Bates) come to swinging London, giving us an alien's view of mid 60s London, soundtracked by Brian Auger & The Trinity and numerous bands off the Marmalade label. See those stills at MySpace – and we'll keep you posted about the movie if and when the full version is finally found.