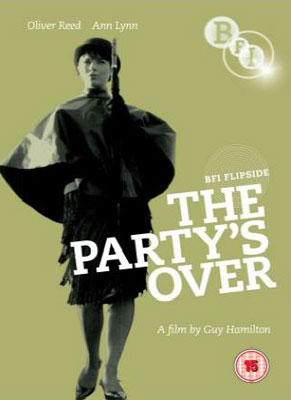 Controversial on its release and rarely seen since, the BFI's cult movie arm Flipside will be releasing Guy Hamilton's controversial The Party's Over (1965) in a dual-format DVD and Blu-ray edition on 17th May 2010.

Here's the tale. Young American Melina (Louise Sorel), falls in with a group of Chelsea beatniks and catches the attention of the gang's leader, Moise (Oliver Reed), as well as  scorn and jealousy from the other members, including Moise' lover Libby (Ann Lynn). At one wild and drunken party, the group's games go too far. Only when Melin's fiancé, Carson (Clifford David), begins investigating does the truth reveal itself.

Originally banned by the censors for its controversial content, a high-definition version is on the market with a host of extras, as you would expect. These include an alternative export cut of the main feature, archival short films and documentaries and a fully illustrated booklet including comprehensive notes and essays from academics and film historians. Pre-orders being taken already, £13.899 secures you one.