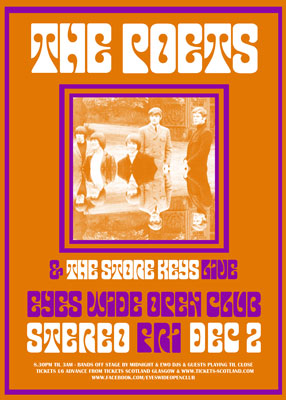 Legendary 60s beat band The Poets have reformed, playing live for one night at the Eyes Wide Open 7th anniversary night, which takes place at Stereo in Glasgow.

The date for your diary in Friday 2nd December, with the legendary mod band, headed up by original singer George Gallacher and guitarist Fraser Watson, will be playing much of the repertoire that made the band such a hot ticket 40+ years ago. See the band below, in their original glory.

Opening for The Poets are The Store Keys, featuring Stevie Jackson (Belle & Sebastian) and Roy Moller, who will be releasing their debut single 'Daddy Was A Mod' on Barne Society Records on 45 soon (you can hear it here). Of course, there are also guest DJs joining the Eyes Wide Open team, including Lenny Helsing (The Thanes/Poets), Craig Reece (Get The Records On/Starla Records) and Craig & Jennifer Dishington (Grow Your Own).

Tickets are available in advance for £6 (STBF) from Tickets Scotland Glasgow in person and online at www.tickets-scotland.com, Doors will open at 8.30pm, with the first band on stage at 9.30pm. The Poets will play at 10.30pm, with all live music over by midnight. DJs will play til 3am. 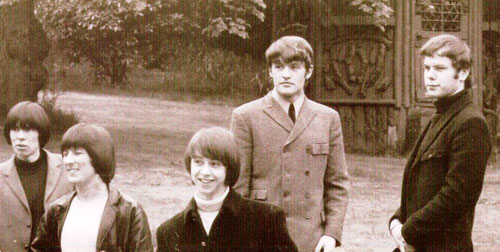