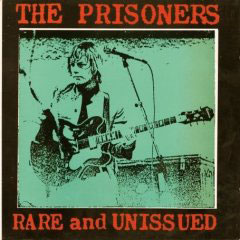 Originally released (in limited numbers) on vinyl in 1988 on Billy Childish’s Hangman label, Rare & Unissued by The Prisoners gets a welcome reissue this week from Big Beat through Ace Records.

Rare & Unissued brings together all the hard-to-find recordings by the ‘pioneers of modern day garage’, but is slightly different to the original vinyl release. That’s because Ace has already reissued some of the album’s tracks on previous Prisoners reissues – so rather than offer duplicate tracks, there’s two previously undiscovered cuts – the instrumental Unbeliever (fast) from the Wisermiserdemelza sessions and a take of Love Me Lies recorded live in a studio some time before the its appearance at those sessions.

Also added are two cuts recorded at a demo session in 1984 which appeared on various small run compilations – Joe 90 and a version Hush – and new sleevnotes, with contributions from band members. You can pick it up now from Amazon, which is selling it for £8.98.

Find out more about the CD at Amazon.co.uk