A display of costumes worn by the most successful Motown group of all time, The Supremes, is coming to London. 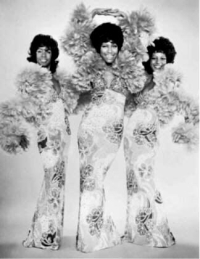 The display at the Victoria & Albert Museum will show the changing image of The Supremes from their
early Primettes days right through to the more glamorous,
Hollywood-designed outfits they wore at the height of their fame. The exhibition will include dresses worn by all three members – Mary Wilson, Diana Ross and
Florence Ballard – from a selection of live performances, television appearances, album covers, and more. As well as the clothes the V&A exhibition will display archive television footage, photographs and magazine articles to help contextualise the impact the band had on America and the world.

The Story of the Supremes from the Mary Wilson Collection
13 May – 19 October 2008
The Victoria And Albert Museum, Cromwell Road, London SW7 2RL
£5 entrance

For more on the the exhibition see the V&A website here.