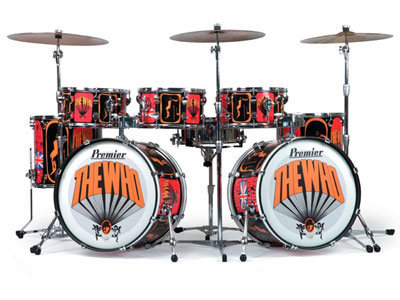 Got a games console? Then you've probably heard of Rock Band, where you get to play plastic instruments in time to the screen, feeling like a rock god, but looking like a big kid. The Beatles had their own version out last month with authentic Beatles-style instruments and now it looks like The Who will also have a Rock Band.

In a new interview, Roger Daltrey has claimed it would be happening – probably in 2010. Speaking to US entertainment magazine Mass Live the singer said: 'The game, yeah, yeah, they're going to be doing a Who one next year. There is one planned. (The idea) is fabulous. Anything that gets non-musical people interested in music is wonderful. In my opinion, music is our last true great freedom. They can burn our books, they can burn our paintings, but they can't stop us singing and making music.'

Which means we can look forward to trademark Who gear (like the Moon drums above), a smashable Townshend guitar and a Roger Daltrey permed wig. Only time will tell if any of those things become reality.