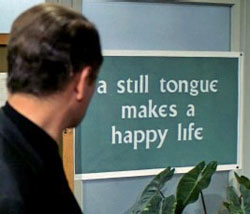 Not too long ago, we mentioned that Sky was set to remake 60s cult classic The Prisoner, starring ex-Doctor Who Christopher Eccleston, with writing duties falling with Bill Gallagher (writer of gritty dramas such as Clocking Off). Well, the film industry could be about to overshadow them.

As usual, we expect little of it, but would like to be pleasantly surprised.

Read the full article from Variety