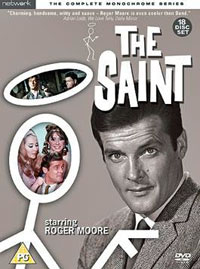 If you bought and enjoyed the 14-DVD boxset of the colour Saint TV shows (reviewed here on Modculture), you’ll be pleased to know that Network is doing the same with all the black and white episodes, under the title The Saint – The Monochrome Years.

It clocks in at an amazing 18 discs (running for 3550 minutes) and of course, stars Roger Moore as debonair playboy Simon Templar. still great vieiwng and packed with stars of the era, including Honor Blackman, Warren Mitchell, Patrick Troughton, Oliver Reed, Julie Christie and Sylvia Syms. In addition to the episodes, the box set also features a new documentary on the making of The Saint with Roger Moore, audio commentary with Roger Moore, episode trailers and an image gallery.

It’s available from 18th September, for a price of £129.99 (but you;re sure to get it cheaper). Part of the proceeds goes to the Heaven’s Angel’s campaign, which aids healthcare in Africa.