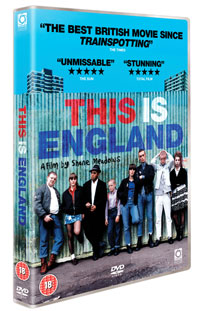 We have just received the full confirmed details of the DVD reissue of Shane Meadows’ This Is England, the much talked-about movie about growing up in the north of England – and as part of the 80s skinhead movement.

If you want to know more, check out our in-depth review. And if that appeals, you might want the DVD, which is scheduled now for 3rd December. It’s a two-disc release, including the following extras:

It should retail for around £19.99 (although Amazon are already heavily discounting for pre-orders). And if you want to see more from the same director, a Shane Meadows box set will also be released around the same time.

More about the DVD at Amazon.co.uk