Soul legend Tina Turner is set to play four live dates in the UK next year, eight years after she was supposed to have retired from performing. 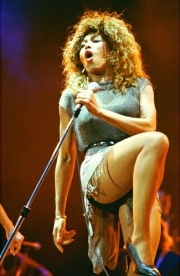 Turner, 68, had recently revealed a comeback US tour, and that has been extended to the UK to include two nights at London’s 02 Arena on March 3rd and 4th, and Manchester’s MEN Arena on March 30th and 31st. The promoters have promised Turner’s new shows will feature songs spanning her entire career, including the classics such as ‘River Deep Mountain High’ and ‘Proud Mary’.

A statement from Turner said

After performing with Beyonce
at the Grammy awards in Los Angeles, the response was overwhelming.
Everywhere I went people were asking me when I was going back on tour.
So after a lot of thought and planning we announced an American tour.
Now Europe beckons and I don’t want to let down all my loyal fans over
there. See you in the New Year.

Tickets are to go on sale next Wednesday May 28th, available from the usual outlets.