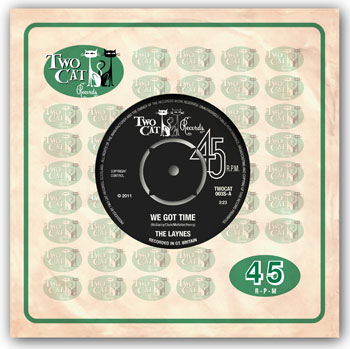 You may or may not know that the people behind the Double Breasted fanzine have a record label – with Two Cat Records focusing on good 'ol fashioned vinyl.

The initial idea behind Two Cat Records was to release 7-inch singles from 'favourite bands', but actually kicked off with a CD album in 2009 from Glasgow garage band The Laynes. Two years on, and another CD later, Two Cat Records is finally releasing that vinyl, kicking off with a 45 from The Laynes.

An original composition, We Got Time is described as 'a Kinks style rave up with a Nazz influenced harmony driven chorus, some chinking piano and a piercing guitar solo'. Backing that track is Wasn't It You, a cover of the classic King/Goffin track famously covered by The Action.

You can secure your copy now by contacting [email protected] or via www.twocatrecords.jigsy.com/new-releases where both tracks can be heard and then ordered through the link. A third track on mp3 is available to everyone who buys the 7-inch. Also, Wasn't It You can also be downloaded from Amazon, iTunes and Spotify. In October, there will be another release from Two Cat Records, this time from Modus with Love Bug b/w Kitten Casino, which will also be available on 7-incvh single and digital download.