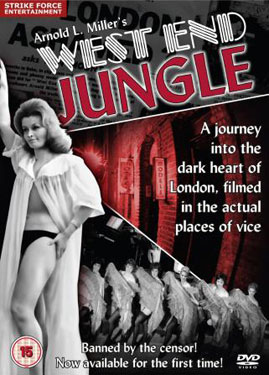 Banned back in the day, the West End Jungle documentary has now passed the UK censor, heading to DVD in January 2009.

It’s described as the ‘seedy reality’ of the sex industry of the early sixties in Soho, looking at how the industry survived attempts to ‘clean up’ the streets – finding a home in a new breed of members club. Indeed, director Arnold L. Miller films in those seedy night clubs, interviewing the girls involved and other ‘experts’ in the field. You can see why it got thrown about by the British movie establishment back in the day.

Yet today it’s trashy cult viewing, a period piece and unlike the movies of the time, a genuine insight into what Soho was really like 45 years ago. You can pre-order a copy now for around £11.

Find out more about the DVD at Amazon.co.uk