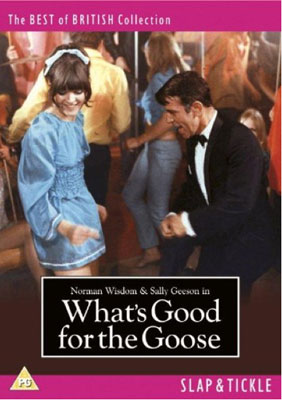 At last after many years of waiting, there’s a UK DVD release for 1960s cult classic What’s Good For The Goose.

Odeon is releasing the film Norman Wisdom perhaps didn’t want to talk up in his later life, the tale of a middle-aged banker called Timothy Bartlett. He’s suffering from a mid-life crisis and during a banking conference in Southport, hooks up with the local hipsters, starting a relationship with teenager Nikki (Sally Geeson) as well as taking in The Pretty Things at the local psych hangout.

It’s a film you have to see to believe. Odeon is releasing it on 26th September with trailers and a booklet, with a pre-order price of £9.70 on Amazon. See over the page for one of those Pretty Things club scenes.