David Axelrod has described it as ‘one of the best albums that I ever did’. Circumstance may have prevented it from being released back in the day, but now we can all appreciate Little Willie John’s lost Capitol recordings. 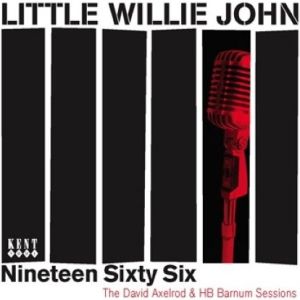 The fine people at Kent Records have seen fit to release Nineteen Sixty Six, featuring John’s complete Capitol sessions. The twelve selections move forward his sound from the tough R&B sides he recorded at King, towards a more contemporary mid-60s soulful groove. On arrangement duties is HB Barnum, making Lou Rawls an obvious sonic comparison, with some James Brown balladry thrown in the mix for good measure. Those West Coast session men were worked hard and, as this album proves, it certainly paid off. The sad tale is that the album could never be released in 1967, for John returned to prison for an earlier crime he had committed. The album was consigned to stay in the can in 1968 when John died in Wall Walla Prison in Washington State from pneumonia. However the master tapes survived and have been remastered for us to hear.

Nineteen Sixty Six is out now on Kent and available from Amazon here.