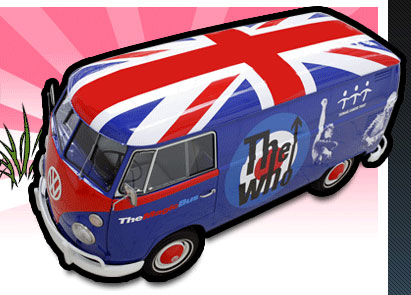 The Who – in conjunction with the Teenage Cancer Trust – is currently running a competition to win The Who’s Magic Bus – and it is a real bus.

Well, it’s actually an original (but customised) Volkswagen T1 panel van from 1965, signed by both Roger Daltrey (patron of the Teenage Cancer Trust), and Pete Townshend.

You have to pay £5 to enter (with proceeds going to the charity) and answer a ridiculously easy question. And as a bonus, all entrants get a free download of a previously unreleased live performance of The Who’s ‘Magic Bus’ performed during the International Bus Meeting in Hannover in October 2007. If you are feeling lucky, the link below takes you to the band’s competition page.