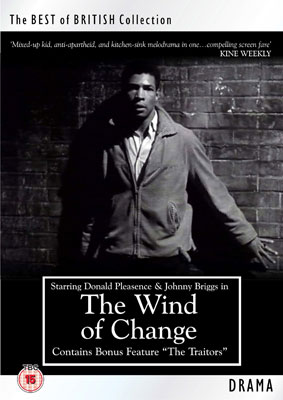 We flagged this up a few weeks back, but we've just got hold of a copy of Wind of Change on DVD – and we have reviewed it over at Cinedelica.

If you missed it earlier, Wind of Change centres on the Notting Hill area of London at the turn of the 60s – a teen gang led by Frank (Johnny Briggs) blames the black immigrant population for their lack of work. That resentment leads to an attack on one black boy in a dark alley, which kills him and injures his girlfriend, who turns out to be Frank's sister. Will Frank's family support him? Or turn him into the law.

Coupled with another movie (The Traitors, a spy flick from '62), it's available from Odeon from August 2009. But before you get your order in, check out our review.

Wind of Change reviewed at Cinedelica