Details of the 2008 Small Faces Convention have been announced. 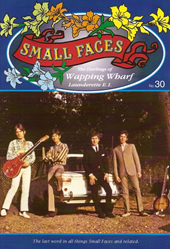 The annual event, organised by John Hellier, will once again take place at Carling Islington Academy in north London on Sunday September 21st. Live acts confirmed so far are Small World, Small Fakers, 17Black, Matt Henshaw, Fuzz Face, Petty Hoodlums, 5 o’clock Heroes, RT3, and special guests Secret Affair. Tickets for the 12th edition are still priced at £20 and will be on sale from in June  from the venue and John himself via the Wapping Wharf website.

And whilst on the subject of the Small Faces, Issue 30 of fanzine The Darlings of Wapping Wharf Launderette is available now, priced £3.50 (from the Wapping Wharf website). It features coverage of last years’ convention, the recent plaque unveiling on Carnaby Street, and much more besides.