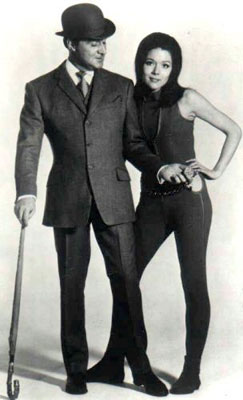 One of Britain's leading cult TV (and movie) writers is celebrating 50 years of doing what he does – which makes it the perfect time for a Brian Clemens retrospective at the BFI.

His shows include the likes of Danger Man, The Avengers, The Champions, Adam Adamant Lives! and later stuff like Thriller and The Professionals, not to mention the odd Hammer flick. So some good stuff to choose from.

The BFI will be showing the pick of all of that over July (although sadly not top flick And Soon The Darkness), along with a couple of Q&A-style discussions with the man. Full details over the page.

Brian Clemens in Conversation
In an interview illustrated with clips from his long and versatile career, ace scribe Brian Clemens will share some of his fantastic exploits both real and fictional. A giant in the field of genre film and TV, he has delighted millions with creations such as The Professionals and Thriller and his stewardship of The Avengers on its journey from standard fare to surreal masterpiece.
Wed 28 July 18:30 NFT1 Joint ticket available with Captain Kronos: Vampire Hunter £12.90, concs £9.65
(Members pay £1.40 less)

Brian Clemens on The Avengers
Brian Clemens on stage, talking about his work on one of the UK’s best-loved and most successful series, The Avengers. Brian will tell us about the genesis of the series and its development from studio-bound naturalism to full-colour filmed fantasy. The chat will be preceded by one of Brian’s most famous episodes from the series: The Avengers: A Touch of Brimstone (ITV 1966 Dir James Hill With Diana Rigg, Patrick Macnee, Peter Wyngarde 52min)
Thu 22 July 18:20 NFT1

An Honourable Murder
A Danziger Brothers release reimagining Julius Caesar as a fast-moving tale about backstabbing in the world of big business.
UK 1960 Dir Godfrey Grayson With Norman Wooland, Margaretta Scott 69min U
+ The Vise: Death Walks by Night
Clemens wrote often for The Vise, a series which aired in the US before its sporadic UK outings some years later. In this episode, mystery surrounds a murder in a shabby London hotel.
UK 1955 Dir David MacDonald With Robert Perceval, Nanette Newman 25min
Fri 2 July 18:20 NFT2

The Avengers: Don’t Look Behind You
A chilling, atmospheric episode (later reinterpreted successfully for the Diana Rigg story, The Joker) finds Cathy Gale trapped in a cross between a haunted house story and a psychological murder mystery.
ITV 1963 Dir Peter Hammond With Honor Blackman, Patrick Macnee 52min
+ Adam Adamant Lives!: The Terribly Happy Embalmers
This BBC series was the most successful attempt to capture the spirit of The Avengers and this Clemens scripted episode shows the (sadly largely unrealised) potential of the idea.
BBC 1966 Dir Paul Ciappessoni With Gerald Harper, Juliet Harmer 60min
Tue 13 July 20:45 NFT2

Thriller: Coffin for the Bride
Clemens’ masterful anthology series brought thrills and chills to primetime on both sides of the Atlantic. Here Jayston (later to be TV’s Quiller) is a bad sort who needs teaching a lesson, but is Stella (a brilliant Helen Mirren) the lady for the job?
ITV 1974 Dir John Sichel With Michael Jayston, Helen Mirren 66min
+ Quiller: Any Last Requests
Quiller – based on the Adam Hall books – featured several scripts by Clemens. In this episode – originally written for the Mission Impossible series – Quiller has to rescue a condemned prisoner without anyone
noticing he’s gone.
BBC 1975 Dir Michael Ferguson With Michael Jayston, Moray Watson, Edward Judd 50min
Sun 25 July 15:40 NFT3

Captain Kronos: Vampire Hunter
Long before Buffy became the scourge of bloodsuckers everywhere, we had Captain Kronos, a swashbuckling swordmaster rescuing buxom maidens and laying waste to the undead. As with Dr Jekyll & Sister Hyde, this was a Hammer production and Clemens, with his fantasy-fuelled plotlines and outrageous imagination, was a perfect partner for the studio. Crammed full of scream queens and mixing humour with its gothic horror, this is a bona fide cult classic.
UK 1972 Dir Brian Clemens With Horst Jonson, Caroline Munro 91min 15
Wed 28 July 20:45 NFT1, Thu 29 July 18:30 NFT2, Sat 31 July 20:30 NFT2