As we first reported last summer, Mod Crop the musical is now finalised and shortly to open. 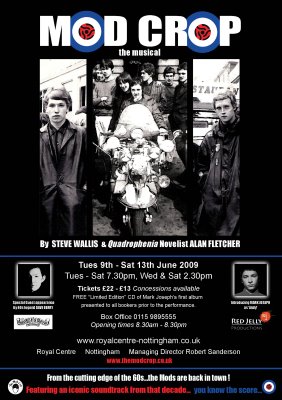 Written by Steve Wallis and Quadrophenia novelist Alan Fletcher, the story is based on Brummel's Last Riff, the latter writers' first novel in his Mod Crop Trilogy. The musical is set in 1965 and stars Mark Joseph as the 'new mod on the block' alongside a cast that includes 1960s singer Dave Berry, who will perform amongst others his classic 'The Crying Game', backed by a five-piece band. It is to be directed by Martin Berry.
The show is on for seven consecutive performances at the Nottingham Theatre Royal from June 9th, with a nationwide tour hopefully to follow. To book tickets (costing £22 or £13 concessions) for the run in Nottingham contact the theatre box office here.
The official Mod Crop website is here.