The forthcoming Mods Mayday revival event now has its own soundtrack, courtesy of a new bands EP from Rowed Out Records. 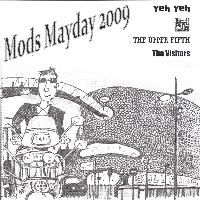 Mods Mayday 2009 is an four-track vinyl EP (with picture sleeve and insert), featuring the cream of todays' mod revival bands. Featured bands and songs are Yeh Yeh with 'And So Begins Another Day', The Petty Hoodlums with a cover of the Shocking Blue single 'Send Me A Postcard', The Upper Fifth with 'OK, Alright and That's All', and finally The Visitors give us 'Next Time Around'. The EP is a very limited release, with just 200 copies being pressed up.
Mods Mayday 2009 is out on March 18th, and you can order your copy now for £3.00 plus postage from the Rowed Out website here.