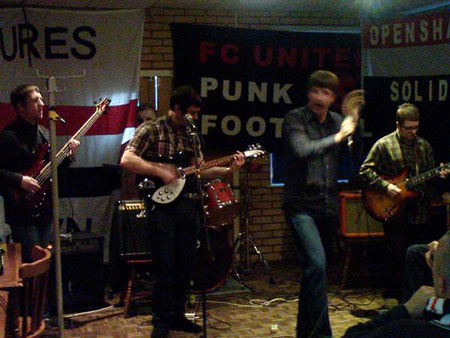 I was trying to think of a line to describe Manchester's Elgazelle, but the band themselves sum it up best of all on their MySpace page with the line 'enthused and fused by the sounds of the sixties; the chimes and rhymes of Mod and Soul, Garage Psych and Rock n Roll….'

If you want more specifics, I'd say it was a mix of 60s-style Nuggets beat/garage and Manchester-style indie, the 60s side just about winning the fight. In terms of personnel, Elgazelle are Paul Wright (Lead Vocals/Harmonica), Rick Hyde (Guitars/Vocals), Phil Lodge (Bass/Vocals), Lee Morse (Lead Guitar) and John Gagon (Drums), who all 'unite over a shared affection for sherbet and pop, John Smedley and Clarks Originals', not to mention the ability to knock out a catchy tune.

Find out how catchy on the band's MySpace page, where you'll also find upcoming live dates. No music as yet, but the band are in the process of recording our debut EP at Blueprint studios in Salford. We look forward to hearing it.