Eli ‘Paperboy’ Reed and The True Loves are a band out of time in 2008, but very much in tune with the sounds Modculture readers appreciate. 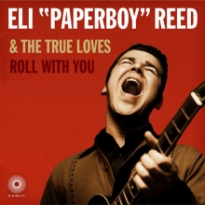 24-year-old Reed, from Allston, Massachusetts, has forged a sound based on the early 60s R&B, with Stax-style horn embellishments. From the soulful balladry of ‘Am I Just Fooling myself’, the funky ‘The Satisfier’, through to the hip-shakin’ ‘Doing The Boom Boom’, his voice is always at the fore, and (if you’ll excuse the pun) he always delivers. If you want authenticity then you’ve come to the right place, as Reed sings like his life depends upon it. His debut album Roll With You has just been released, to ecstatic reviews. Reed and his band are over for a few dates in Europe this summer. You can catch them at:

Hear Reed on his Myspace page here. You can buy the album Roll With You from Amazon here.