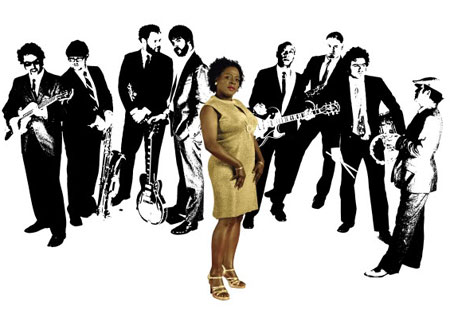 On April 6th 2010, Sharon Jones & the Dap-Kings will release their fourth album, I Learned the Hard Way, produced by Bosco Mann and recorded in its entirety on an old Ampex eight-track tape machine. You'll no doubt here much of it when the band lands in the UK that same month for what seems like a one-off gig.

That gig takes place at Koko, Camden High Street, London NW1 on Wednesday April 14th 2010, proceedings kicking off from 7pm. Tickets cost £19.50 and 'should' be available for sale from today (Tuesday 16th February). Check with the usual agents and the venue for more.

If you've not hear the band, you really should if you like all things soulful and funky. The MySpace will give you a sneak peak.

Sharon Jones & the Dap-Kings on MySpace