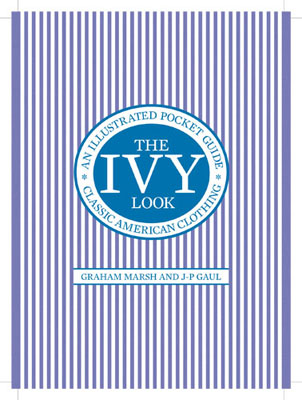 Not on the market as yet, but we're giving you advance warning of The Ivy Look by Graham Marsh and JP Gaul.

As you might have guessed, this forthcoming 208 page paperback covers what the title suggests, specifically the clothing and accessories that dominated the American male dress code from 1955 to 1965 and its continued influence today. From the button-down hip of Steve McQueen, Paul Newman and Miles Davis to the continental Ivy influenced sharp suits of Jean Paul Belmondo and Marcello Mastroianni, taking in the Kennedy brothers and of course, the first-generation London mods. New shots of original clothing and accessories, along with key examples of the cover art of Blue Note, Stax, Motown and Atlantic, magazine advertisements, French New Wave and key American movie posters plus newly-created illustrations – it will all be here.

Sadly, you'll have to wait until September to get your hands on the book, specifically 16th September 2010. Although you can pre-order now direct from the publisher.