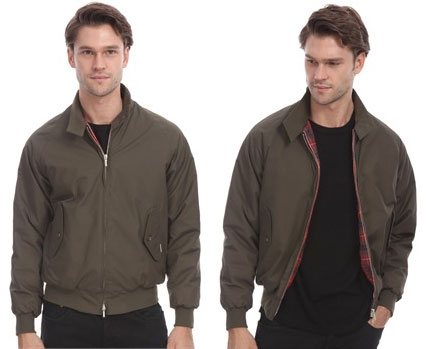 I know I've just featured a recent addition to the John Smedley range, but I'm going to mention the label again, as part of a wider story about BrandAlley. But if you want to get a bargain, you might have to be quick.

I might be slow on the uptake with this site, but BrandAlley basically does limited time clearance sales on men's and women's brands, plus homeware. Relevant to this site right now is a sale that ends today of John Smedley gear (last 'season' I think, but as it's Smedley, not an issue), plus some Baracuta Harrington jackets and some other gear that might be of interest (Sebago, some designer pork pie hats, Ray-Ban etc). The Harrington pictured above is marked down from £180 to £79 for example, with Smedley knitwear getitng as low as about £40.

Downside? You have to sign up and register, but that's free and you only do it once. Once you're in, click on 'private sales' section of their site to see all ongoing sales, but note that sales start and end all the time.

Update: We've just been told of a similar site called Secret Sales, which apparently also has the occasional Smedley clearout. Had a look and not one now, but there's a major Penguin clearout there, if that floats your boat. You'll find that site here.