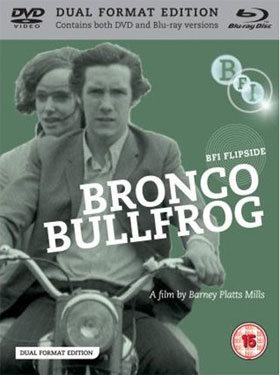 We featured one Flipside release yesterday and here are the full details of the other – Bronco Bullfrog.

We have covered it many times in the past as a movie, so if you want a breakdown of it, see this extensive gallery or read this review. If that gets your interest up, the disc is out to buy bia BFI/Flipside from 13th September. Of course, this being a Flipside release, plenty of extras thrown in, which are…

You can pre-order the dual-format disc now for £12.99. For reference, the next Flipside releases will be Private Road (1971) by Barney Platts-Mills and a double bill of Duffer (Joseph Despins, William Dumaresq, 1971) / The Moon Over the Alley (Joseph Despins, 1976) in January 2011.

Find out more about the DVD/Blu-ray at Amazon.co.uk