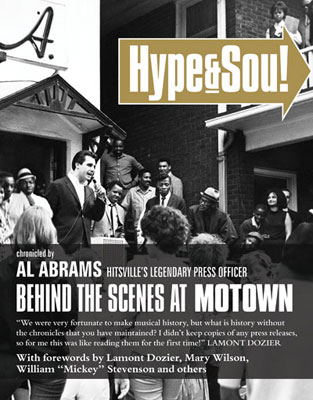 Thanks to Jason again for flagging this book up, which had passed me by. I'm talking Hype and Soul by Al Abrams, which is sure to be of interest to any Motown fans.

Al Abrams was Motown's Director Of Publicity and according to the write-up, he 'tells it like it was' as a small record label became the ultimate hit factory. Detailed too, as Abrams kept every memo he sent, collected label documents, retained press releases and newspaper clippings and amassed a huge number of photographs, many never seen before. If you love the label, it sounds like this should be on your Christmas list.

You can secure one direct as a limited edition 'luxury' 288-page hardback book, with the first 500 copies including a bonus record, a red vinyl replica of the historic 1964 'Hitsville U.S.A. Greetings To Tamla Motown Appreciation Society' 7-inch single. This was a promo only to mark the visit to Hitsville of UK Soul guru Dave Godin to Hitsville in 1964.