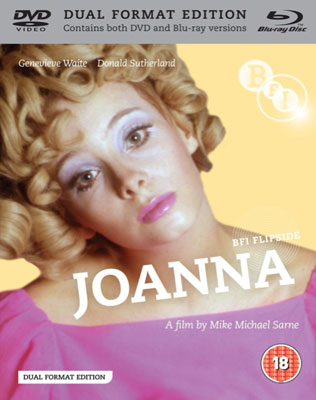 The second of the releases from BFI and Flipside for April is Joanna, shown last year on the big screen by Flipside and reviewed by us over at Cinedelica when it was on that big screen.

17-year-old Joanna (Genevieve Waite) is cool, stylish, and determined to start a new life as an art student in swinging sixties London. She indulges in the pleasures of casual sexual encounters, colourful daydreams and an impromptu trip to Morocco with the wise and debonair Lord Peter Sanderson (Donald Sutherland). But when Joanna falls in love with Gordon (Calvin Lockhart), from Sierra Leone, her life begins to get complicated.

Yes, once again, there are extras. This is a Flipside release, after all:

Road to Saint Tropez (1966, 31 mins): Sarne's debut film, an 'anti-travelogue' starring Udo Kier, Melissa Stribling and Gabriella Licudi
Death May Be Your Santa Claus (Frankie Dymon Junior, 1968, 37 mins): an experimental examination of an interracial relationship in late 1960s London.
New interview with Mike Sarne (2010, 16 mins, DVD only)
Joanna, Mike Sarne’s novelisation of the film, presented as a downloadable PDF (DVD only)
Illustrated booklet with essays and film notes by Chris Campion (writer and author who is currently working on a biography of John Phillips of the Mamas and the Papas) and an essay by Kodwo Eshun

As you've probably gathered, the film is in high and standard definition, with the title heavily-discounted by Amazon right now – it's £11.99 and released on 25th April. Note also that there's a paperback book of the film on eBay right now – it's currently at just £1.

Find out more about the release at the Amazon website