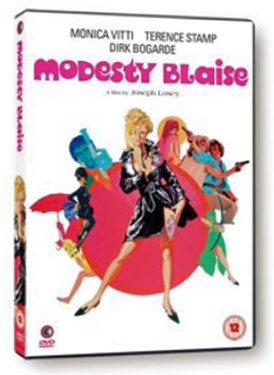 It's been around elsewhere for some time, but Second Sight is soon releasing Modesty Blaise for the first time on DVD in the UK.

It's out in 22nd September 2010 and judging by the advance details we've been sent, will not come with any extras, give or take an original trailer. Anyway, it's the 1966 movie adaptation of Peter O’Donnell’s newspaper comic strip, with Monica Vitti as Modesty Blaise, 'the world’s deadliest female agent', helped along the way by faithful sidekick Willie Garvin (Terence Stamp), taking on arch-villain Gabriel (Dirk Bogarde).

In truth, it's something that works visually far more than it does as a film, but certainly worth catching. It should be available from Amazon for pre-order soon, priced officially at £15.99, but likely to be discounted to nearer a tenner. Oh yes, here's that trailer: