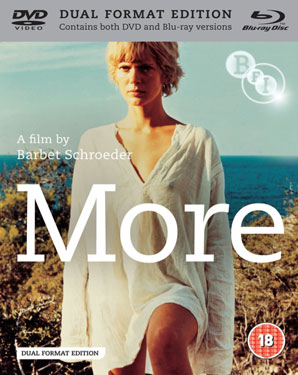 It’s a film that would probably have been long-forgotten but for its soundtrack. However, More has that early Pink Floyd soundtrack (when they were called The Pink Floyd) and is being issued on Blu-ray by the BFI for the first time soon.

The soundtrack was done by the (just) post-Syd Barrett band, playing in the background of a movie that details a German student called Stefan (Klaus Grunberg), who heads to Paris, meets up with the hipsters, then falls for American Estelle (Mimsy Farmer). They head to Ibiza, where they get mixed up in drugs, as well as falling foul of the local ‘mr big’. It doesn’t end well.

This release features both the high and standard definition version of the film, with a new documentary called Making More and trailers for this and some of director Barbet Schroeder’s other cult classics. There’s also an illustrated booklet too. 19th September is the release date, you can pre-order for £11.99. Look out for a review.