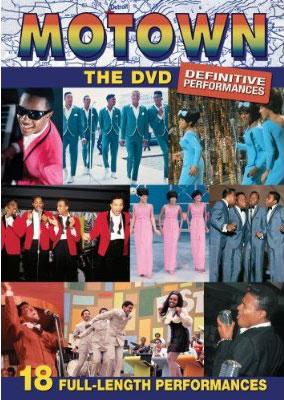 There's been plenty of cheap and nasty Motown DVDs in the past, but Universal has just released one that might be worthy of your cash – Motown Definitive Performances – the DVD.

Described as presenting '18 classic classic television performances', it uses original footage from between 1965 and 1972, including the likes of The Marvelettes, Marvin Gaye, Martha and the Vandellas, The Four Tops, The Supremes and Stevie wonder to name just 7 of the 18 acts present (including a couple of less obvious names too, like he Contours and Brenda Holloway).

All are here with remastered audio for the modern era, along with a host of extras, including a Berry Gordy 'Teen Town' interview, vintage interviews with the acts themselves, footage of the 'Motown Picnic' and a round-up of news and events from 1959, the year that brought us Motown. You can pick it up now from Amazon, priced at £9.98. Look out for a review here soon.

Find out more about the DVD at Amazon