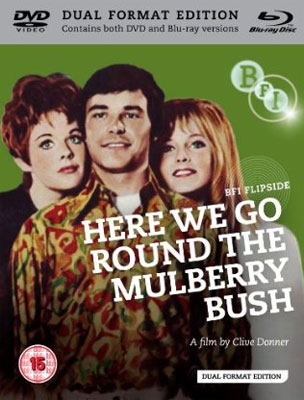 We said it was coming, now we have full details of the BFI's DVD and Blu-ray release of Here We Go Round The Mulberry Bush.

According to the BFI, this 1968 coming of age cult classic is released on 13th September 2010, with the first-time disc release offered 'fully uncut and re-mastered in High Definition'. For full details read on.

Depending on your choice of standard definition DVD or HD Blu-ray playback, the release offers up that complete uncensored presentation of the main feature, an alternative censored version (Blu-ray only), alternative censored sequences (DVD only) and a couple of shots – Because That Road is Trodden (Tim King, 1969, 23 mins, which is a dream-like confessional concerning the fantasies of a public schoolboy) and Stevenage (Gordon Ruttan, 1971, 21 mins, a documentary celebration of Britain’s first New Town).

Of course, there's a booklet too, with contributions from Hunter Davies, Steve Chibnall, Vic Pratt and William Fowler. You can pre-order now, priced  at £12.93.