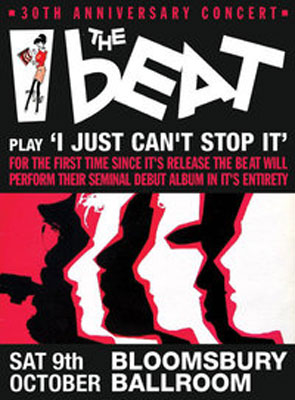 Hot on the heels of The Selecter doing a 30th anniversary comes something similar from The Beat, which is doing its own 30th anniversary gig, performing the I Just Can't Stop It album (the band's debut) in its entirety.

Yes, the album that brought us Mirror in the bathroom, Best Friend, Hands Off She's Mine and Can't Get Used To Losing You will get an airing in a similar format to The Selecter show – playing two sets, the first a mixture of new material and other classics by the group and the second set will be the I Just Can't stop it album in its original order.

Billed as a 'one off' gig (so don't expect it to tour, it takes place on Saturday 9th October 2010 at the Bloomsbury Ballroom, Victoria House, 37 Southampton Row, London WC1B 4DA. Tickets are available now, priced at £25 each.