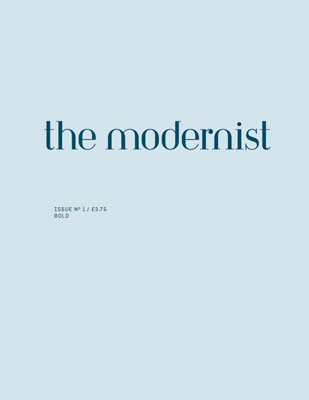 Not as interesting as perhaps the title suggests, the Modernist Magazine is primarily about modernism in the design and architecture sense. Although the opening issue does contain a feature about mods too.

The magazine is the work of the Manchester Modernist Society, which organise events and talks around midcentury and modernist architecture and design. Now it is doing a magazine, which launches this month.

The 'mod' article is entitled Mods or Modernists, with Stephen Hale asking how 'modern' the original mods were. On top of that, there's a foreword by Jonathan Meades, a photo essay on Oscar Niemeyer's Brazil, a look at Esperanto, a feature on logos past, a piece on Manchester city centre, a glimpse at the 1965 plan for Liverpool city centre and more. There's also some news and reviews thrown in.

Like I said, not mod, but some mod interest both specifically and generally, especially if you are a 'native' of the north of England. There's a magazine launch part on June 23rd or you can pre-order the magazine now at the website.