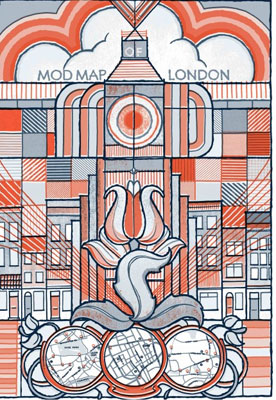 I don't know how many of you happen to be in travelling distance of the SXSW Music Conference in Austin Texas, but if you are, check out the This Is Mod event.

There are two strands to it, a panel discussion called This is Mod: How British Mod Culture Changed The World will take place Thursday, March 17th at the Austin Convention Center. Chaired by Will Hodgkinson, rock and pop critic of The Times and author of Guitar Man, Song Man and The Ballad Of Britain, the panel will include Ian McLagan, keyboardist and founder member of The Small Faces, David Fricke, senior editor of Rolling Stone magazine, Terry Attack, lead singer of Danish mods Thee Attacks and bizarrely, Phil Alexander, editor in chief of Mojop magazine and former editor of metal magazine Kerrang. But there's more…

Artist Luke Drozd, in conjunction with British Underground, has produced an artwork going by the name of Pete Townshend’s Mod Map Of London, which you can see above. It is accompanied by a mini-magazine featuring words taken from a discussion Will Hodgkinson had with Pete Townshend about Townshend’s 'early 60s awakening into mod culture'.

Sadly, the map is only available at the talk and printed in a limited, 'ultra-collectable' run of 400 copies. eBay is likely to be the place to go, unless the artist happens to have some spares left.

Thanks to Julian for the tip off!