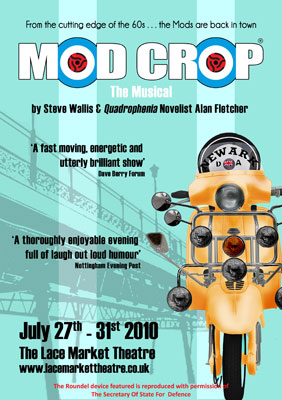 It was running last year and now Mod Crop The Musical is returning for another run in Nottingham.

Written by Steve Wallis and Quadrophenia novelist Alan Fletcher, the story is set in 1965 and based on Brummel's Last Riff, the latter writers' first novel in his Mod Crop Trilogy.

It's going out again this July at The Lace Market Theatre, Nottingham, with the same director but with a smaller cast than featured at the Theatre Royal premiere last June due to stage size limitations. Tuesday 27th – 31st July are the dates, more information on the website.